Bikes I don't have

So, I need to get a bit of a catalog of bikes & trikes going here. A good place to start, I thought, would be with some machines I loved and let go. Gotta make room for more, right? MOST of these are owned by friends, a couple have been cut up and made into other stuff.


Built originally in 2006, the Berserker was made for Burning Man. Three 4 foot storm drain sections, laced to aluminum car rims with 96 spokes EACH. About 1500 parts & 8 hours labor per wheel, this was supposed to be "flashy" over the top and laughable. My great friends, Ken Beidleman and Duane Flatmo had built similar wheels before me to use in Kinetic Sculpture Racing. Trying to be light was something I didn't need to worry about on the playa, and as Ken says "Why not?". It can carry four 10 gal (80#) propane tanks and has two manually operated fire cannons. It HAD solenoids, but batteries and inverters and playa dust are not friends. With the DSC, I was lucky enough to get to bring the Berserker to a couple Fire Art Festivals at the Crucible, back to Burning Man in 2007 with the roof seen above and then traded it away for some architecture plans.

The Berserker now lives with my friends Mo and Scott east of Sacramento. Mo's dad, Michael, has pitched in and they have made it into an amazing ride! They've been to every Burning Man since!


The Tiller - a trike with a big left, rear drive... a central, right, "tiller" type steering wheel... and a front, left-ish caster (shopping cart) type wheel. The idea was, when you steer, the front wheel is forced to turn with the machine. Worked GREAT, except when slow in soft sand. Remember 2008, at Burning Man? Yeah, no good.


The Krez - Also built in 2008, this was a custom ride for Krez. It also has a fire cannon trailer. Rides great... except when you hit the brakes hard (on the steering wheel) it turns and flips over frontwards. Especially fun with a fire cannon in tow. ah... safety third.
As far as I know, it's still kickin' in Humboldt with it's fire cannon trailer and all! I will post more photos of this build... then I'll make THIS TEXT a link... (hint: not a link? Not posted yet)

The Tall Hack (of Death?) -
This thing flips over in every direction, tall, skinny and short wheel base make this one of the most dangerous bikes I've made. Kind of like a unicycle with a bunch of stuff in the way. Of course, my friend Jacob rode it like a champ after crashing into and on top of many things at Burning Man, so he bought it. NOTE: Saw blades were added later. Damn.. looking for a photo. AH! Here...
Chain-less tall unicycle - made for my buddies kid, who can ride anything, a fun & super heavy unicycle. My pal didn't want to spring for the Chromoly, so, conduit is what it's made of.

Beautiful welds! Yes, I learned how to weld at a cake decorating factory. Good thing I'm not a welder, I just build stuff!

The Evil Eye2 - Made in about 30 days from thin air, this machine was raced in the 2008 Kinetic Grand Championship. We won the 6:32 Award for being the first to lose an ACE because we were too slow. Hey, an award is an award. This machine is VERY similar to the Berserker, but it only had 3 foot wheels and custom rolled / built hubs, no car rims. Looking back, maybe we should have gone "Zombish" - Zombie Amish certainly would have been cooler. The Evil Eye2 was reclaimed 14 days after the race. Technically only existed in it's "finished" form for two weeks.... BUT, is about HALF of something else.. scroll down to see what...


The Duck Flambé - A machine built on a dare. Well, almost. If you do stuff like this, you will understand that you never expect anyone to take you seriously and actually want to pay you what you're worth to make something cool. But someone did. Bart said the grown-up version of "I double dog dare you" = "Sounds good, how much do you want to get started?" 2008 was a good year for building bikes. And so, with a ton of help from Ken Beidleman, the Evil Eye2 was turned into a 4-seater with new 4 foot wheels, WITH car rims, and a fire cannon that shoots out of the top of it's head. It also steers from the rear seats, like a barnstormer, and has suicide doors.

The Duck Flambé was a present for Bart's dad, Frank. They truck it out to Burning Man every year (3 so far) and it lives the rest of the year at his winery in Los Gatos, CA. Apparently it's a big deal in the Christmas and Thanksgiving parades there too! A ton of build photos HERE if you want to see more.

The "Die Neunzehn" - Made from 19 other bikes... in a day. This was raffled off at a fund raiser / party at the DSC in Oakland. The guy who won it became a member soon after, so that worked out okay.

That's it for now. I'll add more when I sell / barter / or give away some more! 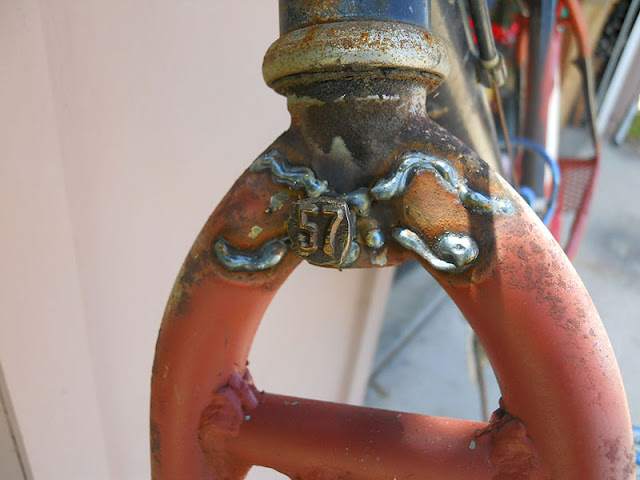